ALICIA QUARLES: E IS FOR ETIQUETTE

Recently, I met E!’s Alicia Quarles. She’s pretty and pretty nice and very well mannered. You know how some people think and act like they’re FABULOUS? Not Alicia, but she is. And if you ever see her enjoying a meal with her husband or just living her life in the city, she won’t mind you approaching her, she figures she’s in your living room, why not?
Of course, we would like you to use discretion, at least let her finish chewing. 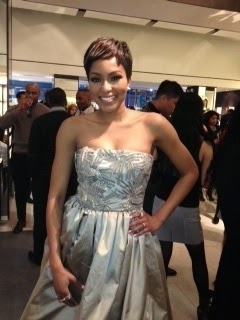 What do celebrities do that you wish they wouldn’t?
My number one pet peeve with celebrities is when they walk into a room and say hello only to me. The A-Listers get it. They’ll greet everyone, from the producer to the sound man. Acknowledging the hard work of others is real class.

Have you ever-encountered poor manners from someone you were interviewing?
Another pet peeve is lateness. Once, a celebrity was so late, I cancelled the interview. I let their reps know that money was wasted and not just my time but the entire camera crew’s time. The next day, the celebrity came to my office and apologized and delivered a bottle of wine.
Wouldn’t you love to know who it was? But since Alicia has manners, she won’t tell.

How do you feel about asking personal questions? I never begin an interview by asking personal questions. On those rare occasions when I’ve been directed to ask something I truly didn’t feel appropriate, I’ll say, “I’m not comfortable asking this, because (then I outline the reasons).” It’s a lot about instinct, I feel it out and that tells me whether to “go there” or not.”

What were some of the golden rules of etiquette in your home?
My parents taught us that appearance was very important, not in a vain way but they believed that you don’t get a second chance to make an impression. We had to dress for occasions properly, (not easy for me, I was a tomboy).
You’d never know it.

What was an absolute no-no?
No elbows on the table! My parents also taught us what cutlery to use and how to use it. It’s paid off. I have good table manners.
Too bad her table manners aren't contagious.

What do you think of young people with respect to etiquette?
I’m impressed with the degree of etiquette today’s young people have. Young folks are portrayed as being a generation of disrespectful people who don't have manners but nothing could be further from the truth. What I've learned from my observations is that teens today generally do have etiquette, even if they are glued to their phones.
Nice to hear someone say something nice about young people.
Posted by Yvonne&Yvettetiquette at 10:30 AM


beautiful inside and out !

I've done the "say hello to the most important person first", I felt awful each time, can't believe I did it twice. In my defense, it was always someone I always wanted to meet: the artist Richard Prince, and Mary Boone, the art dealer. so I got caught up in the moment. I won't do that again.

Thanks for this great insight on very common things that we should all do. Love reading your posts. Keep them coming.

I love people whose good manners come from kindness and compassion, and not passive aggression. Quarles sounds like a class lady, as befits this blog. I love it.

I was delighted to read Alicia's comment about "young people today" and the manners they possess. It's refreshing to read a positive comment on todays youth. They need encouragement, not discouragement.