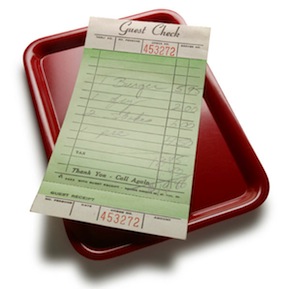 A friend of ours who works in a midtown restaurant explained the drama of presenting a check to a table. “There’s nothing more complicated than when a table of say, eight, wants to split one check with several credit cards. An even split is fine but some actually want to pay for their chicken, another one’s appetizer and someone else’s drink.”

And then there’s the old, “I had the this and you had the that." When it comes to leaving their share, "They forget about taxes and tips," she said. Leaving $30 for a $25 entree isn't a show of generosity.

The server isn’t being difficult if they can’t split the check to your liking. They have a computer to answer to. We learned that there are various computerized programs, such as Aloha and Micros. Some can break down individual meals and drinks by the seat and others don’t.

She advises diners to use cash or do an even divide on credit cards. Credit cards and some cash can work, it’s up to the server to make sure the credit card is closed out or the cardholder just unwittingly hosted a dinner. (This can usually be corrected.)

When she goes out with friends, they’ll give the last four digits of their credit card, the name of the card and how much to charge it. One acquaintance calls it an ATM night when he dines with others. He puts the whole check on his card and takes the cash. (He also avoids a bank fee.)

And one last tip – don’t stiff the server if you didn’t like your food. She/he didn’t cook it. Talk to the manager, you’d be surprised how generous restaurants can be when they know you weren’t happy.

Buon Appetito!
Posted by Yvonne&Yvettetiquette at 6:03 AM 1 comments

Bottoms Up? Not So Fast. 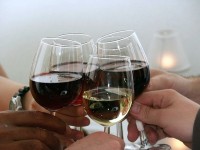 This is the proper way to hold a wine glass, by the stem. Don’t hold it as if it were a tumbler. When you clink glasses, look into the eyes of others toasting, it’s a show of sincerity and acknowledgement of their presence. If you don't drink, ask for a soft drink or water, no need to explain why. Then take a sip, leave the guzzling to big cars.
Posted by Yvonne&Yvettetiquette at 8:37 AM 0 comments

HAMMING IT UP PROPERLY

There’s nothing like a dependable ham to serve up at a cocktail party. No one knows this better or does this better than Monte Mathews of Monte’s Ham.

After recently observing one guest ripping off a piece of ham with their bare hands at a party, we thought it was time to give time to ham matters and manners. We asked Monte for some tips.

1. Never try to eat more than a biteful. If you’re the host, note that a piece of ham shouldn’t be larger than a 1-1 ½ inch square.

2. Ham sandwiches are great for cocktail parties, but they should be pre-made and not so big as if they’re going to be packed into a lunch box. Monte prefers Martin potato rolls. He finds party rye and pumpernickel breads too dry.

3. The perfect sandwich should have a layer of mayonnaise, honey mustard and a nice touch is a thin slice of English cucumber (Apparently, these can be found in America.)

4. If the host hasn’t pre-made sandwiches and you’re on your own, go easy on the mayonnaise and mustard and go easy on the host - if there’s no 23 whole grain bread provided, work with what’s there.

5. Never load up your cocktail napkin with a mound of sandwiches or other goodies. Greed is not good.

Cheers!
Posted by Yvonne&Yvettetiquette at 9:07 AM 1 comments

The Death of Osama bin Laden, Something To Cheer About?

We don't think so. Yvette and I, no doubt, were pleased to hear that an important mission had been accomplished. However, it didn't occur to us to wave flags and run out and cheer. That would have been just as uncivilized as the crowds in the Middle East cheering in the streets, happy to hear about the death of three thousand innocent people on 9/11.

So, who's uncivilized now?  This is a time to show restraint and to show that through it all, we can show off our civility.  Every minute spent cheering bin Laden's death, is a moment stolen from the memory of one who lost their life on 9/11.

We should take a page out of a group in Long Island who chose to recognize the ones they lost. "It's not about Osama," one woman said.

If our government can muster the civility to assure that Osama was buried in proper Islam accordance after his heinous crimes against us,  individually, we can too.
Posted by Yvonne&Yvettetiquette at 10:09 AM 7 comments