We were surprised to learn that some people not invited to Chelsea Clinton’s wedding were miffed (we weren’t). One person who was under the illusion of being a good friend complained, “I’m good enough to borrow a plane from, but not good enough to be invited to the wedding.” We all know feeling slighted isn't an affliction of the rich and famous with private planes. “After all of those free tickets I gave to her, I’m not invited?” a friend of ours whined when she wasn’t invited to someone’s wedding. They weren't even plane tickets.

So this is how it goes? Someone does something for the mother or father of the bride or even the bride and because of that there’s the expectation of being invited to the wedding?

It goes like this – at a certain point there has to be a cutoff. And maybe the man with a plane wasn’t considered a friend but just a nice person who offered to do a favor; little did the Clintons know that they owed him one. That’s not how to win friends and influence and get invited to a wedding.

Maybe the best way to handle this situation when word of an impending wedding spreads is (One problem is that people make it too much about the wedding and not the marriage.) expect not to be invited for all kinds of valid reasons – budget, location, huge families, and a large chunk of the invitee list reserved for people who just have to be invited, remember The Godfather?

A couple of years ago we weren’t invited to a cousin’s wedding but our brother was. It was hurtful, but we got over it. There was never a confrontation, no bad blood and we’re still cousins who care about each other.

When you tally up the costs of being invited – a gift, outfits, transportation (no problem if you have your own plane) maybe it’s not the worse thing that could happen. You’ll get over it.


.
Posted by Yvonne&Yvettetiquette at 12:45 PM 3 comments

IT WAS GREAT! ONE YOUNG MAN PULLED UP HIS PANTS! 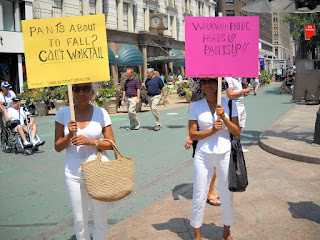 Posted by Yvonne&Yvettetiquette at 3:56 PM 3 comments

THE SAGA OF SAGGING PANTS

Enough is enough. On Saturday, if you’re in New York, we will be doing our own march against sagging pants. Our march will begin at noon on the north side of 34th Street and 6th Avenue. Then, we’ll stroll up 8th to 42nd Street. We will most likely end up at the Harlem Book Fair on 135th Street.

It’s not style; it’s vile when you see a man walk down the street showing off his underwear. It’s not cute, it’s not right. Underwear is UNDER wear. It will never be a dress for success look. Those who chose to display this odd trend look funny and walk funny. Yet, nothing about it is funny.

We applaud State Senator’s Eric Adams for his effort to stop this ‘look’ with his billboard campaign – RAISE YOUR PANTS, RAISE YOUR IMAGE.

We hope to see you on Saturday.
Posted by Yvonne&Yvettetiquette at 9:33 AM 8 comments

DRESS FOR SUCCESS OR DRESS FOR A MESS?

We don’t mean to be the sob story sisters, but growing up there were difficult times. However, you’d never know it by the way we were dressed. Our clothes were clean and pressed, and our shoes were shined or polished. (Sneakers, tennis shoes were worn only in the gym and on weekends.) That’s the only way our mother would let us leave the house.

We’re grown up now and that’s still the way we leave the house. Not so with many people these days. Any old thing seems to go. Wrinkled shirts, pajama pants coordinated with t-shirts and of course, jeans, jeans everywhere and flip-flops too. They used to be footwear for a day at the beach -seems like now they’re worn everywhere but on the beach.

We understand an outfit that can take you from the office to a cocktail party but not the outfit that never stops giving all day and any day - from the laundry to the supermarket to the office, to parties, to nice restaurants and even to the opera. You’d think you’re in the middle of La Boheme.

It’s becoming more difficult to differentiate weekdays from weekends; it’s all rolled into one because people look as though they’ve rolled out of the bed, threw on something and out the door they go. Maybe casual everyday had its beginning with Casual Fridays.

“It’s a reflection of a general breakdown of society,” a friend pointed out. “How people dress is yet another example of a culture without boundaries.”

“A candidate showed up in a pair of jeans,” a director of human resources said. “I couldn’t believe it. He also arrived with his coffee in hand.” Dressing inappropriately professionally cuts both ways. Yvette was interviewed by an HR manager who sported a shirt that he must’ve snatched out of the dryer that morning and was clearly not a permanent press.

We’ve been upgraded on flights, no doubt because we showed up at the ticket counter dressed comfortably but well. We don’t understand fellow travelers who come to the airport dressed as though they just left the gym with their luggage.

Shoes should be shined. Slacks should be hemmed, shirts ironed and whatever happened to creases? We crave creases. Not sure about the dress code for an event? Call and ask.

What we’re talking about isn’t a question of style or designer labels, it’s about presentation and a show of self respect and respect for where you are and for others whether in the office or someone’s home.

The next time you leave your house, stop by the mirror and ask yourself, “Is this how I want the world to see me today and where will it get me?”
Posted by Yvonne&Yvettetiquette at 11:30 AM 10 comments