We think this one gets first prize for the tackiest, dumbest, stupidest question.  It's also mean spirited because someone who has a love life (or thinks they have one or is about to lose one) is usually the one posing the question.
If you have to ask someone this question, this means that you're totally out of line because you aren't even a good friend.  Or perhaps you have to ask because unbeknownst to you, you are no longer considered worthy to be privy to this information.  If someone has a love life, they will tell you. It's just that simple.  The question has no value.  What's the answer? Is it a perky, "I don't have a love life."?
Since we're twins, people think everything about us should be in sync. "Does your sister have a boyfriend, too?" We love opportunities to change the subject, it makes for a more interesting conversation.
Smug couples like asking their single friends about their love lives. It's as if they have some divine right to pry.  If this happens to you, just know you've hit pay dirt. Smile sweetly, don't answer the question. Instead, ask, "How's yours?" Note the lips curling, the eyes no longer dancing and the disappearing smiles.
When Yvonne lived in Italy, where it seems like the whole country is married, people always wanted to know about her personal life. I remember her telling me that every time she'd come back from a great vacation, the first question from married friends was, "Did you meet anybody?" It was if the whole point of going on vacation was to meet someone.  That she had a great time and saw something new and interesting didn't matter.  The entire vacation was cancelled or a flop because she didn't meet SOMEONE.  Tired of this tired question, she shut one friend up for good.  The woman, married to a wealthy man, had come back from a fabulous vacation with her husband.  "How was it?" she asked. Yvonne had just come back from Tangier. "Did you meet anyone?"
"No," Yvonne responded, "Did you?"
The woman never asked Yvonne that question again.  And no one else should ever ask it either.
Posted by Yvonne&Yvettetiquette at 1:32 PM 0 comments

THEIR WINE OR YOUR WINE?

What to do when a guest brings a bottle of wine?  Do you open it? Or do you serve them what you have? It depends and this can get tricky.
Say if you serving a white wine that didn't cost that much and is also awful. Your guest gives you a bottle of Pouilly-Fuisse and it's not gift wrapped. Do you say, "This is nice, let's have this."  Or do you say, "Thanks, I can't wait to try this. Can I get you a glass of wine?"  If it's that cheap wine you've been drinking, you're not being very gracious.  When you know that your wine isn't as good as the wine someone has brought to your house, offer to open it. Let your guest tell you that's not necessary. If it isn't chilled, you can offer the wine that's already opened while the bottle chills.
If a guest brings you a really dreadful wine (probably a bottle someone brought to them) you still should mind your manners. Tell them you'd be glad to open theirs, but you have a wonderful white Bordeaux or great red they may like. We bet they'll be happy to drink your wine as opposed to theirs.
Champagne is another story. It can get expensive. Maybe the bottle that someone brought is a rare treat for you and you don't want to waste it on people who really aren't champagne drinkers. If it's in the box, keep it in the box. Or if you're in a small group and you know everyone's taste level, open it. But what if you're serving a sparkling wine and someone brings a beautiful champagne? This happened to me, Yvonne, last New Year's Day. I was serving Prosecco. A couple came with a bottle of Veuve Cliquot in a gift box. I was ready to open it. "No, don't. You don't have to, it's not even chilled."  I thanked them profusely and continued to serve Prosecco. Had they brought it in chilled and not in the box, I would've insisted on opening it.
Then there's the serial bottle opener host. He or she has amassed a clumsy selection of wine from previous guests. They will go through their 'cellar' thinking nothing of serving something Italian, something French, something Italian and nothing for the ensuing headache.  If you care about your well-being, this is the night to cut down on your drinking. You don't have to take the wine tour of the world, unless there's some place for you to spit it out.
A gift of wine is like any other gift. Most likely, you're in the company of friends and you should know what they like. If you can't afford a nice bottle of wine, don't go to the plonk section of the wine shop unless it's for yourself.
And if you're the host, don't go to the plonk section of the wine shop unless it's for yourself.
Cheers!
Posted by Yvonne&Yvettetiquette at 10:04 PM 0 comments

PLEASE, WON'T YOU GIVE OUR BABY A PRESENT?

Maybe gifting is on our minds because the holiday season will be here soon enough. Recently I, Yvonne, was at a friend's house and was shown a birth announcement. There was an adorable picture of the baby. Little silver baby shoes were tied together with blue ribbon at the top of the announcement. At the bottom, all things cute flew out the window. In not so tiny type there were two website addresses for baby presents!
How no-no can you get? There is no need to solicit presents on an invite or announcement of any kind. Family and good friends will call and offer congratulations and most likely ask if there's anything you need or would like. In the case of babies, you can never have too many of anything, so chances of receiving something silly are slim. Even if these announcements are going to distant relatives and acquaintances, it is not the place of the newborn parents to assume that everyone is going to be sending a gift. Is the announcement about the baby or is about a gift for the baby?
Once, Yvette and I were invited to a birthday party. They didn't ask for a present, the invite specified, "cash only." Where's the joy in giving or receiving? Sending your invitees to the cash machine isn't very gracious.
Feel free to tell others what you really need or would like if they ask. Never volunteer this kind of information unless it's someone in your immediate family.
When you receive a gift, a thank you note is in order as soon as possible. It's especially important to acknowledge gifts if they were ordered from the internet or sent to you from a store. There's nothing more awkward than calling to see if a gift you have sent has been received. No one wants to seem to be begging for thanks. And no one should seem to be begging for a present. And try to avoid writing the thank you in the voice of the baby. They can't talk!
Posted by Yvonne&Yvettetiquette at 9:28 PM 0 comments

Just Because My Hair Is Gray, Don't Call Me A Mother: Dumb Things People Say And Ask In Search of Conversation 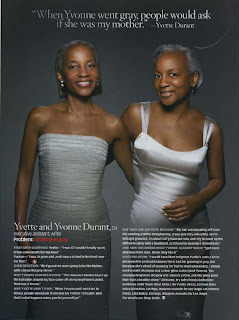 I was the first twin to decided to keep her hair gray. Coloring and straightening was taking an unattractive toll on my hair and me. I was always touching it up, sometimes with mascara that ended up as a smudge on a friend's chin one day.
I remember the first time I became my sister's mother. We were waiting for a table in a restaurant and the young hostess said, pointing from one twin to the other, "Mother and daughter?" I told her and not so kindly that we were sisters.
Recently, I was uptown in a popular restaurant with my boyfriend and a good friend of his.  A young man looking at my friend, a very attractive woman, and me gave us a mother and daughter compliment.  I tried to be as gracious as possible and responded, "No, were just friends." Last mother's day I jokingly emailed my 'daughter' and chided her for not wishing me a Happy Mother's Day.
Yvette and I don't understand why people have the need to identify people they don't know. Why do they find it necessary, based on appearances to try and figure out people's relationships? How many older men are asked if their wives are their daughters? Plenty, I believe - and the same goes for older women with younger men.
If one listens and is earnestly engaged in conversation, this information will present itself and save everyone the embarrassment and yes, sometimes the offensiveness that is a result of not listening. Instead, many take the shortcut and blurt out a question.
I learned this lesson the hard way. I had arrived at a party with my sister.  There was a line at the door, guests preceding us congratulated the host as they entered the apartment. When it was my turn, I congratulated him as well. Yvette and I were guests of a guest, we'd assumed it just an old fashioned house party.  A while later I met the lady of the house and someone was congratulating her too.  About an hour into the party I walked over to her noticing her pregnant looking stomach. "Congratulations, when are you due?" The minute the question came out of my mouth I knew what was coming. "Do I look pregnant?" I had no choice but to be honest. "You, do and everyone has been congratulating you and your husband, I was sure you were pregnant. I am so sorry. I didn't mean to be rude."
She was kind and didn't ask me to leave. Yvette was mortified, she'd seen the whole thing.
I learned my lesson. People will tell you who they are. Don't tell them. Don't ask two men if they're brothers, the same goes for two women. Don't ask a man about his wife just because he's wearing a wedding ring. Consider that he may have a husband.  A woman may have a wife. children may have two daddies or two mommies.
We're losing the art of conversation in our rush to know it all. Better to make snap judgements and conclusions and worry about the facts later.
I decided long ago that my gray hair isn't going anywhere and so has Yvette. The picture of that appeared in Oprah last October helped a lot of women make the decision. Some decided not when we told them about the drawbacks. If you're not ready to become your sister's mother and can't contain yourself in a civil manner when this assumption is made and  comes flying in your face. Hold off on the gray.
Happy listening and talking!
Posted by Yvonne&Yvettetiquette at 10:37 AM 0 comments