No, this isn't a post about the lack of etiquette found in fairy tales. It's about texting, the Twenty-First Century's call waiting. That convenient service that forced you to field calls in your home and weigh who was the more important caller among your friends and family.  Texting isn't that insidious, it's just expensive and can be annoying. The colons and parenthesis, and the abbreviations that can give you a crashing headache as you try and decipher them. And it's really hard to hold your head up high if you're always dashing off a message. 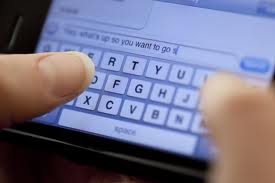 When someone gives you their cell phone number, there's nothing wrong with asking if they mind text messages. Be mindful that texting is not free and not everyone's cell phone bill is being picked up by an employer. (And do not suggest as it has been to us, an unlimited plan. Not everyone treasures a close relationship with their phone.)

Consider that many keep their cell phones in their bedrooms, maybe you should hold off on texting them late at night.  And if you're in a car and the driver is texting, don't be shy. Ask them to stop immediately.

Funny, emails are beginning to look as old fashioned as phone calls and notes.

*Click on the highlighted sentence for a 'must read' written by a fan of ours, Edith Routh.
Posted by Yvonne&Yvettetiquette at 9:29 PM

if you don't want a text, or email
while you're asleep then don't sleep with the text or email device
or sleep with it( if it's all you have to sleep with)...but turn it off..!

've been a fan of your blog for awhile, after stumbling upon it a few months ago. Thanks for the great content! We recently published an article “10 Acronyms I Wish Would Catch On for Texting” that you may be interested in sharing with your readers.