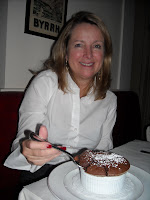 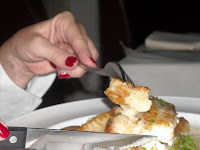 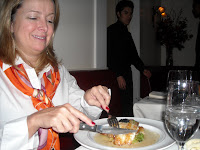 “The only foods you should eat with your hands are French fries, fried calamari (in Europe calamari isn't dipped in sauce), bread and sandwiches,” said Suzanne Latapie, owner of the Upper East Side bistro, Le Chat Noir as she elegantly and properly ate her dinner.

Notice the position of her hands as she holds her knife and fork. In an earlier post we pointed out how violently some people eat and turn into Psycho-diners. They literally stab the meat on their plate as if it were about to be snatched. Not in the picture is the piece of bread on the table. Suzanne took a roll out of the breadbasket and tore off a piece and put it on the table, the roll stayed on the table as well. Never put a piece of bread back into the basket once you’ve touched it. If there’s no bread plate, putting it on the table is fine. If you think the table isn’t clean enough, ask for the check and leave. Suzanne used her knife to gather food onto her fork. Shoving food onto a fork with your finger is fine in the privacy of your home but not in restaurants. Some may argue that it’s never fine; it’s right up there on the no-no list with drinking directly from the milk carton. When Suzanne took a sip of her wine, she held the glass by the stem.
Sometimes she dines with a close friend and likes to order different entrees. The way she likes to share is to eat a portion of the food on her plate and then offer the other half to her friend and the friend does the same. This way plates aren't going back and forth and no one is eating food that’s been touched. There is nothing ruder than when someone takes the liberty of eating off your plate without asking.

Le Chat Noir probably makes the best chocolate soufflé in town – talk about sinful. It’s eaten with a spoon and when you taste the mouthful of chocolate you’ll understand why spoons were created. We love cheese soufflé and eat it with a spoon even though restaurants will offer a fork and spoon. This could be confusing but soufflé often comes with a small salad and you don’t want a spoonful of salad.

Like most restaurants, there are no toothpicks on the table. When I, Yvonne, lived in Italy, I never understood why there were toothpicks on the table when it was considered really bad form to use them. They'd talk about you like a dog if you even looked like you were going to take one. Toothpicking at a table is as bad as flossing in public. Grooming before, during or after a meal at the table is another ‘never do’.

Dinner was Suzanne’s treat so we left a generous tip. Staff really appreciates that because when they see the boss with friends they also see no tip in some cases. In small restaurants where there’s no coat check, the owner sometimes takes the coats. He or she shouldn’t be tipped.

We had a nice time, the food and wine were great and so was the company. And the manners were impeccable.
Posted by Yvonne&Yvettetiquette at 6:20 PM