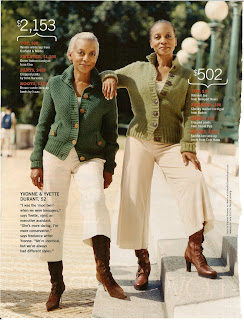 Yvette and I don't think that being twins is one big barrel of fun. A lifetime of being mistaken for someone else can be trying. The script rarely varies. "Oh, I thought you were your sister. You two look so much alike." That's what identical twins do, they look alike.


When we were little girls, adults used to ask us to stand back to back to see who was taller. And since we had to respect our elders and not express to them how that made us feel, we did it. The back to back and side by side tests were sometimes cruel. They would go so far as to say who was prettier. Twin enthusiasts also make the odd assumption or at least act like our hearing isn't too swift. How many times have we heard and watched people talk about us while we're standing there? We've been twins all of our lives so we don't understand the fascination that singletons have with us. And nothing is more sad when someone says, "I always wanted to be a twin."
"Are you the right one?" a woman asked Yvonne. "I'm Yvonne, is that all right? What the woman meant is if Yvonne was the twin she knew.
"Can't you be a little more patient with people? Try to understand them." a friend asked.
"No," Yvonne replied. "Can't they try and understand?"
To us and the enlightened we have distinct noticeable differences. But what happens is that when people see twins, they automatically see sameness, there can be no differences.
The next time you see a set of identical twins, consider these dos and don'ts:
Yvette and I have four other siblings, they are just as special and unique. We've been told that we're miracles. We're not. We're just twins.
Posted by Yvonne&Yvettetiquette at 3:45 PM

Of course YOU got the expensive outfit!!!

Gorgeous -- where did the layout appear?